Beijing To The World: Don’t Call The Belt And Road Initiative OBOR To remedy a rather confusing situation where nomenclature and reality did not run together, the Chinese government decided to change the name of its epic initiative to wrap up the Eurasian supercontinent and Africa with an array of trade corridors like the laces running around the contour of a baseball.

Perhaps realizing that “One Belt One Road” was not really the best foreign language name for something that is distinctly plural — there are three overland routes and one maritime which extend between China and Europe — Beijing decided to swallow its pride and come up with a term that would be more palatable for the international populous, one that would be seen as a “win–win”. After putting their heads together and consulting such renowned organizations, such as the Central Compilation and Translation Bureau of the Peoples’ Republic of China and the Chinese Academy of Social Sciences, they came up with a replacement for One Belt One Road:

The “Belt and Road Initiative.” Apparently, this was seen as an improvement.

As put by Una Aleksandra Bērziņa-Čerenkova of the Latvian Institute of International Affairs:

As explained by the Chinese side, the first English translation, namely, “One Belt One Road”, has brought about numerous misinterpretations, as the partners tend to focus too much on the word “one”, assuming that there is to be only one maritime route and a single land belt, whereas, in reality, “The Belt and Road Initiative aims to connect Asia, Europe and Africa along five routes.” Supposedly, the perception of a single road as a limited offer can drive the regional partners into competition mode, therefore, the stressing of the numeral “one” is to be avoided. Also, the word “initiative” has been admitted into the official acronym in order to stress the openness of the strategy, and to avoid criticisms over “China-centered institution building”, that have been gaining momentum as the project progresses.

I first became aware that the Chinese government was requesting this name change in the autumn of 2015, and since then began using the term Belt and Road Initiative — often in conjunction with the Beijing-approved acronym, BRI — expecting that within a matter of months most news and academic sources would follow suit. But nearly two years later this simply hasn’t happened. The name One Belt One Road has stuck, and it’s still being used by major media sources, academia, and, especially, security-oriented think tanks who seem to really like the dystopian twang of “OBOR” as it rolls off their lips. Clearly, “Bah-ree” does not have the same ring to it.

As the below Google Trends comparison shows, OBOR and One Belt One Road are still more commonly used than Belt and Road. 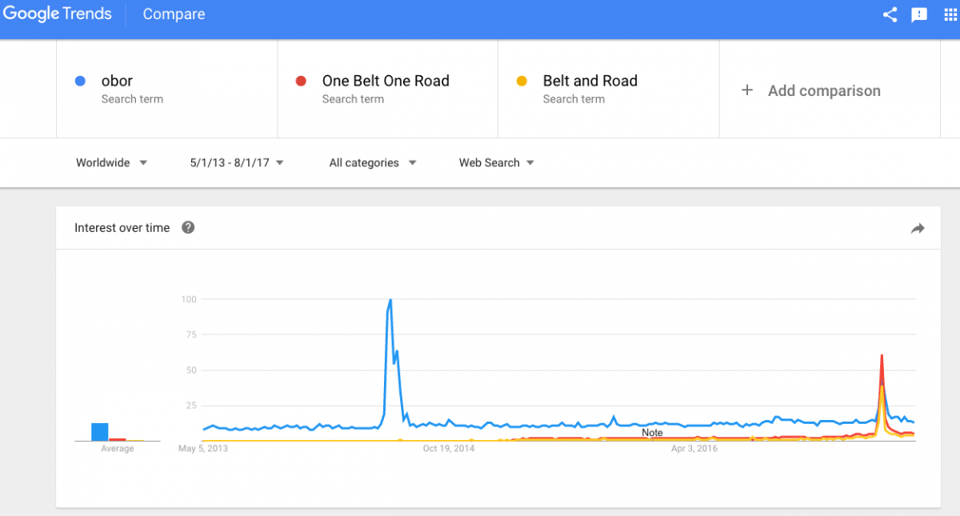 Prevalence of term usage according to Google Trends. OBOR and One Belt One Road are still the most used terms.

However, while OBOR is no longer the name of the initiative, it is still the same top-down plan to build new ports, roads, railways, power plants, and special economic zones across Asia and Africa in an attempt to integrate the entire region into a massive market spanning 60 countries and a third of the world’s GDP.