ISLAMABAD: Despite expanding the withholding tax to cover every imaginable transaction, top 10 contributors to the tax have remained unchanged for the past five years while about two-dozen areas have contributed paltry sums – far less than Rs500 million – in the first six months of 2017-18.

The numbers for July-December of the current fiscal year put a question mark over the strategy of documenting the economy by charging high withholding tax from those who opt to remain outside the tax net.

Some of the new areas on which withholding tax has been imposed do not even fall among the top 20 contributors.

However, the growing share of withholding tax in total collection on the back of higher tax rates has made tax authorities and the political leadership complacent, diverting attention away from core problems in the tax machinery.

When the PML-N government came to power in June 2013, it had announced that it would tackle the extremely narrow tax base by enforcing two tax rates for the filers and non-filers of income tax returns. In line with the policy, it has increased the number of withholding tax in the past five budgets to around 74 in addition to multiplying the tax rates.

There are different rates for one type of tax and for this story 48 types of taxes are being considered.

Four and a half years are gone, the withholding tax on almost all these areas has remained largely unproductive as not only the tax base has been stagnant, but its contribution is negligible except in the case of banking transactions that contributed Rs8.2 billion in the first half, but it was not among the top 10. 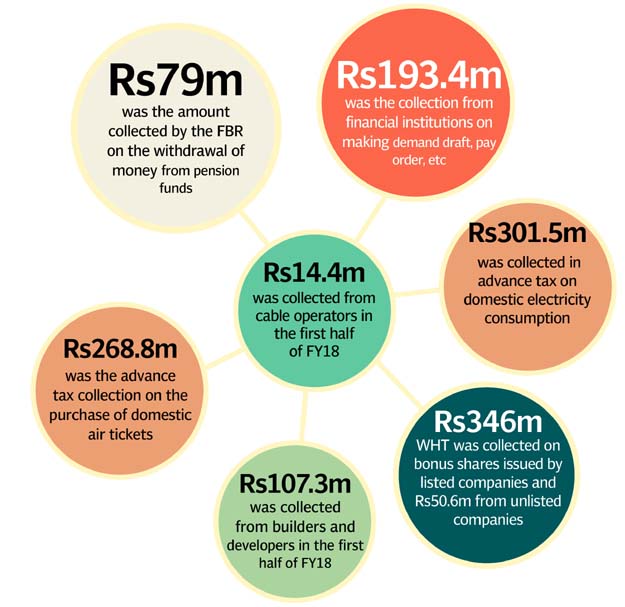 The Federal Board of Revenue (FBR) collected only Rs79 million on the withdrawal of money from pension funds. Tax collection from financial institutions on making demand draft, pay order, etc was only Rs193.4 million. The advance tax on domestic electricity consumption generated a mere Rs301.5 million whereas just Rs332.6 million could be collected from steel melters and re-rollers.

One of the key tax broadening measures announced by the PML-N government in 2013 was the withholding tax on functions and gatherings. However, in the first half of FY18, the collection was a mere Rs436.5 million. In the case of foreign film production, the FBR collected only Rs1.5 million.

Cable operators paid a meagre Rs14.4 million in the first half. Withholding tax on dealers commission could generate a mere Rs38 million.

Builders and developers paid a paltry Rs107.3 million in the first half of FY18. Non-resident Pakistanis paid just Rs263.8 million while no collection was made under the head of payments to non-media persons.

The collection on payments to non-residents for the use of machinery was Rs241.2 million, on dividends Rs19.8 million, from the Pakistan Mercantile Exchange Rs100,000, on insurance premium Rs211.7 million and on minerals extraction Rs180,000.

As was the case five years ago, the major revenue spinners have stayed unchanged.

The most controversial 0.4% withholding tax on banking transactions was not among the top 10 contributors as the collection stood at only Rs8.2 billion in the first half.